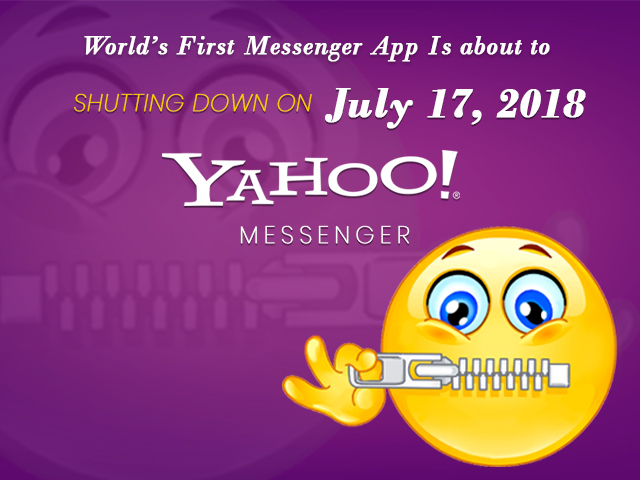 World’s First Messenger App Is about to Shutting Down on July 17, 2018 – Yahoo Messenger

Finally, world’s first messaging app is nearly to shutting down its services by own. On June 08, Oath had announced that Yahoo will be winding down the service of its messaging app on July 17th as it did not stop for experiments and examine how this app has a different stage in the techno communicational... Read More

Secret for How to Make Your Franchise Beauty Salon Business Successful?

Importance Of Internet In The Modern Education

Finally, world’s first messaging app is nearly to shutting down its services by own. On June 08, Oath had announced that Yahoo will be winding down the service of its messaging app on July 17th as it did not stop for experiments and examine how this app has a different stage in the techno communicational world among powerful from Facebook, WhatsApp, and various other smartphone applications.

According to the Yahoo Company, “Currently there is not any product which can take a place of Yahoo messenger. We are still trying our best and constantly experimenting to develop a new moderate solution which contains new features, and offers more effective applications and services”. One messaging app which offers like an invite-only group called the Yahoo Squirrel – currently, this app is still in a form of beta. Yahoo started testing this group messaging app in May 2018.

Yahoo did not demolish out the active users of messenger for a period of time, and analytically whoever signed into any of Yahoo’s property is simply signed into a Messenger. By delivering marvelous services over last two decades, millions of audience have grasped its services – “a company said it”. The company has also clarified that users’ Yahoo ID will always remain active for other services such as blogging, mailing, news, and desire for sports.

In one of Yahoo’s articles, they wrote “We know that we have numerous fans that are using the Yahoo Messenger app since the beginning as first chatting app of its kind. As the rapid changing of communication landscape, we are focusing on to come up with astonish and high-quality app, which can introduce various of unrivaled exciting communications tools that can proficiently fix into the user’s requirements”.

Well, while shutting their app down, Yahoo says that users can download their chat history for the next two quarters of a year. The flies can simply move to users’ computers or devices, but not into the other messaging applications.

Let’s do a glimpse on 1998 when Yahoo Messenger made its first launch as the Yahoo Page. It was a time when direct messages were just the terrain of computers, in a form of email or and messages on ordinary smartphone devices. It was the earliest mind-blowing idea of over the entire messages that were not merged with a specific service providing company.

But in comparison with other modern services, Yahoo Messenger’s features and functionalities were easily exceeded by rapid and rich functions mobile-based services, clearly, messaging applications. Therefore, WhatsApp was not created by any mobile app development company, but by the ex-employees of Yahoo.

Yahoo messenger grasps a special and prioritizes place on the platform of chatting app. Yahoo had achieved various victories by Yahoo messenger on a smartphone. Today it ranks 117 on Android’s App Store and 160 on iOS App Store in the category of social networking.

It’s not only about the shutting down of world’s very first messenger app, but the secrets which are hiding behind its closing. Yahoo is about to launch an advanced messenger app known as Yahoo Squirrel. Rumor says it is fully coded from the latest features and functions which can deliver a massive flow of ease and joy to the users.

Well, I personally hope we can get a highly dedicated chatting app from Yahoo which helps them to surf on the competitive edge of a market (and deliver us what we actually want).

This blog is written by a well-known blogger, Marilyn Delvin. She is delivering user-friendly contents for half of a decade. Nowadays, she is working as a senior writer at leading mobile app development Company in USA.