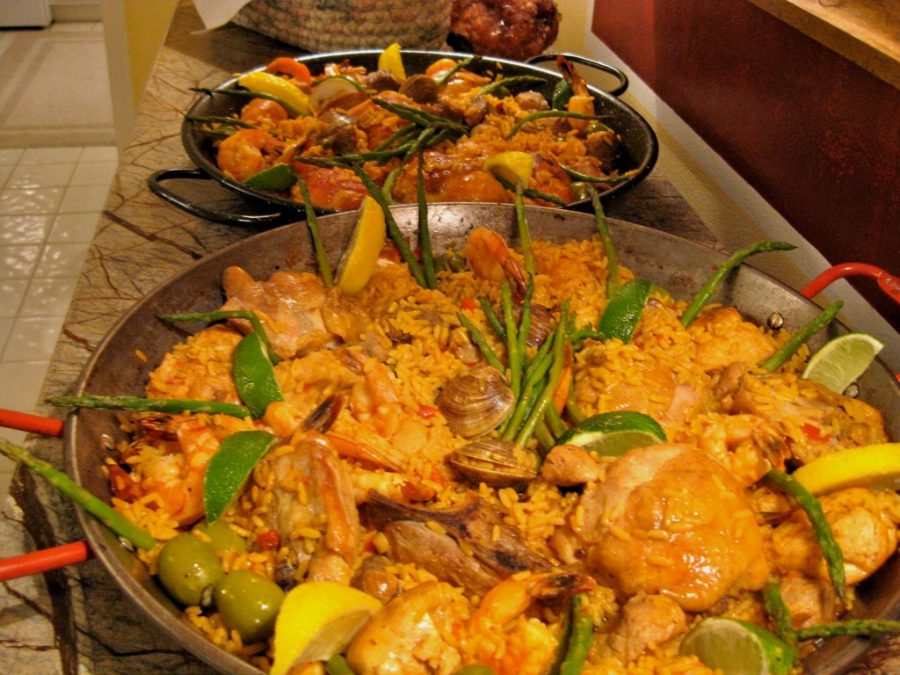 Spain is a country, where it is always sunny, and, what is very important, the food is delicious! You can surely sit down to the table of any restaurant, anywhere in the country and order dishes, which names you see for the first time. There is no doubt that each dish will be delicious. Every... Read More

Why Everyone Needs Water Search and Rescue Training

Spain is a country, where it is always sunny, and, what is very important, the food is delicious! You can surely sit down to the table of any restaurant, anywhere in the country and order dishes, which names you see for the first time. There is no doubt that each dish will be delicious. Every day here, you can try something new. Chose paella, seafood, tapas, or traditional Spanish snacks, desserts and fruit juices.

In each city of Spain, in each district, there is a market with the freshest products. The most famous in Barcelona is La Boqueria (located in the center of La Rambla, not far from the Liceu metro station). In 2005, this market was even recognized as one of the best in the world. You can rent a car in Barcelona Airport and spend a lot of time choosing the foodstuffs at this market.

The Spanish dishes are mostly made of natural ingredients. For example, the olive oil there is aromatic, tasty and healthy! In Spain, you will have a chance to see the production of this delicacy with your own eyes. One more worthy product is the Spanish wine. It is possible to talk about it endlessly, as it is tasty and light, filled with touches of different tastes. You can find a bottle for 3 euros or for 300, but stunning taste is guaranteed no matter the price. It is best to buy wine in wine boutiques in Barcelona. There you can find both the most accustomed and the collection wines.

Spain is famous for its rich, varied and exquisite cuisine. Dishes of Spain, the recipes of which were handed down from generation to generation, support the unique traditions of national cuisine. Here are some of the classical Spanish recipes.

In the south of Spain, in the summer months, there is no better escape from the heat, than a well-chilled organic tomato gazpacho soup. In addition to tomatoes, cucumbers, onions, olive oil and garlic are added to it. 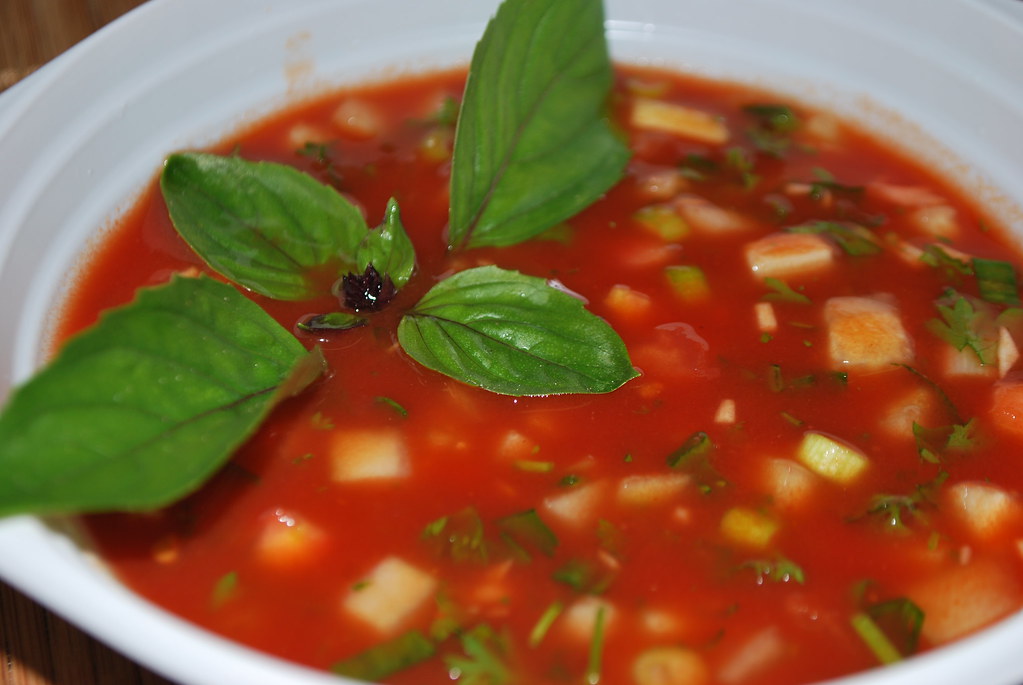 The soup is usually served with toasts and red pepper. According to one of the culinary legends, the soup was invented by Spanish muleskinners, who always kept handy the above mentioned products. Today it is a traditional Spanish dish – one of the most famous in the variety of tomato soups.

This is one more traditional Spanish dish. The recipe is very simple and unpretentious, and gives space for culinary experiments. Properly speaking, it is an omelet with potatoes, but it is very delicious. It is believed that the first mention of the Spanish tortilla dates back to 1817. According to legend, the poor inhabitant of Navarra has prepared the Spanish general a potato omelet from all the products that she could find in the house. The assortment was not rich – potatoes, onions and a few eggs, but the general enjoyed the taste of this dish, and soon, the simple recipe became very popular. Today, you can taste traditional tortilla in any Spanish city – from Seville to Barcelona and La Coruña.

You can find many variations of the famous paella in Spain, but in any case, its mandatory ingredient is rice. Traditionally, the villagers in Spain made paella with the products that were available to them, adding chicken, rabbit and vegetables, which are specific for Valencia, (for example, lima beans or sugar beans) to the rice. However, for centuries the paella recipe has undergone a number of changes, and today in Spain, rice with seafood, (for example with prawns and cuttlefish), is the most popular type of paella.

Paellera is a special frying pan with two handles, which is used not only as an utensil, but as a kind of identification of masculinity. This frying pan is given to a man only once, and it is obliged to use it properly, so that the family won’t be ashamed for too salty rice and burned down seafood.

Ink of cuttlefish, spilled on a plate, at first can confuse the unprepared tourist. However, you should definitely try this unusual dish! 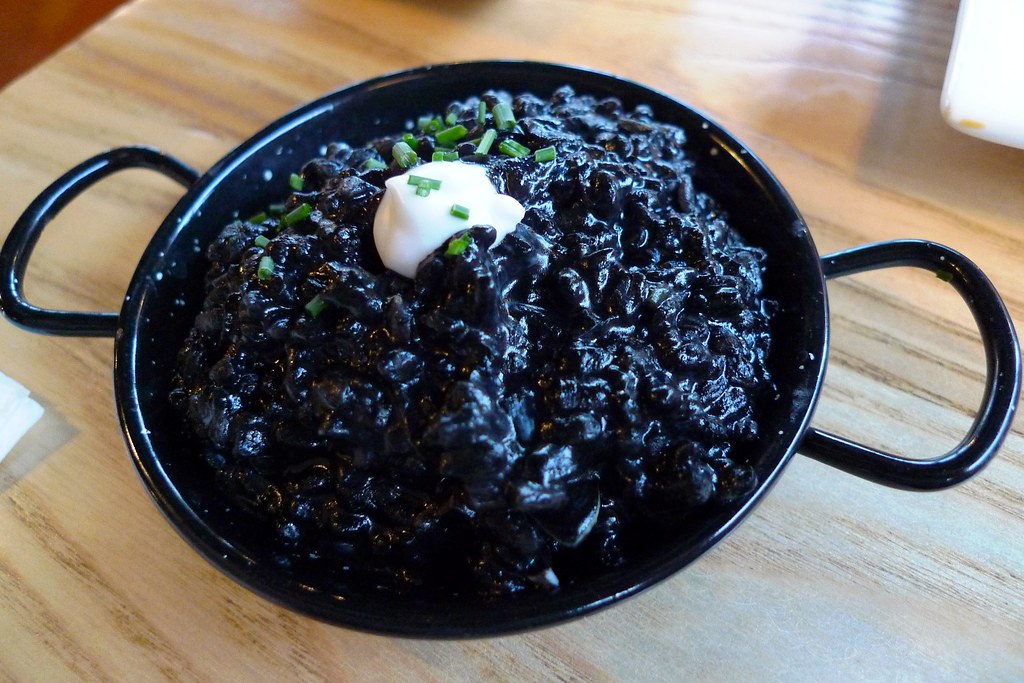 During the cuttlefish preparation, as a rule, a little trick is used – its own ink is used for taste and for the intensity of color, artificial ones are added. Piquancy is given to the dish by onion, garlic, parsley, cayenne pepper and an indispensable glass of wine.

The pride of the Basque cuisine is the dry white chacoli wine, which is often used in the preparation of traditional dishes of the Basque Country. One of them is a horse mackerel with a chacoli. Fish is usually cooked in a saucepan, adding tomatoes, onions, carrots, leeks, garlic, butter and, of course, a glass of chaсoli.

First, when preparing this dish, vegetables are kept over an open fire or baked on a grill until the eggplant’s skin becomes black. Then the eggplant and pepper are covered with a plate and cooled, cleaned and cut into strips. If you are going to make this dish by yourself, do not try to cool vegetables under cold water – they will lose their juice, which gives the dish a distinctive taste and aroma. In most places, this dish is served with toasted bread, moistened in tomato juice and butter, with anchovies and onions, and sometimes with tuna.

Migas is a dish of traditional Spanish cuisine. In translation from Spanish, ‘migas’ means ‘crumbs’. It is not hard to understand that bread is the dish’s basis. The bread is stale and finely divided. 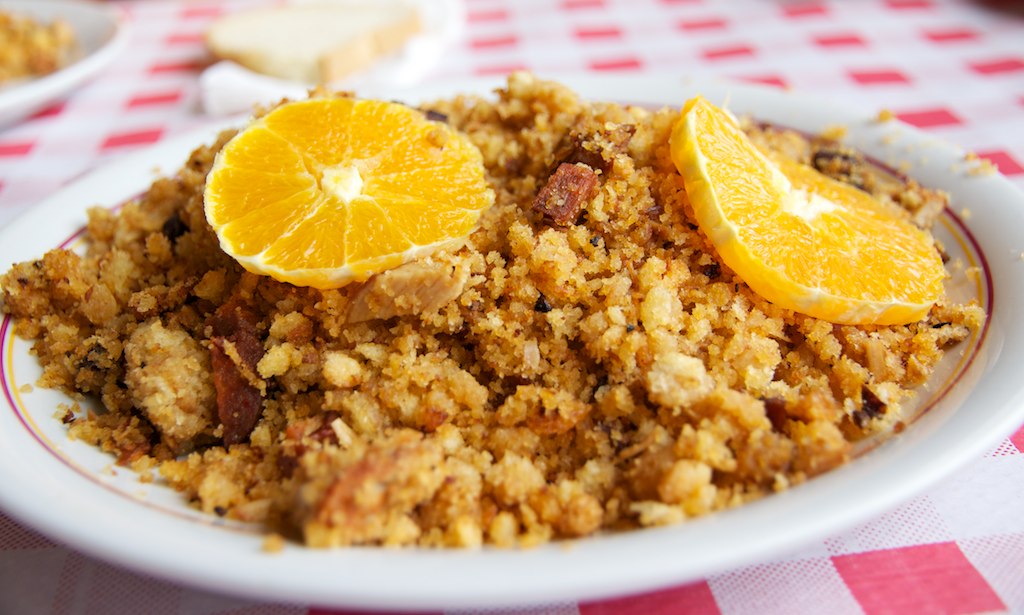 This dish is also called ‘migas de pastor’, meaning, the ‘shepherd’s crumbs’. It was prepared by shepherds, who were grazing herds in a field far from home, from the remains of dried bread. In the simplest version, the dish was prepared from bread soaked in water, toasted in olive oil with garlic.

In modern versions of the dish, bits of bacon, homemade sausages, chorizo (Spanish sausage with paprika), capsicum, and sometimes fried eggs are added. In addition, in each region, there are own preferences according the ingredients of the migas. Grape berries, slices of tangerines, slices of a melon or pomegranate kernels are also put. This combination of salty and sweet gives the dish an unusual and incomparable taste.

Today, migas turned into a fashionable dish that is served in restaurants and bars. On Christmas and New Year’s days in Toledo (and not only there), you can see ads in the windows of bars and restaurants, which say that they serve migas. In such eateries during the holidays, there are always visitors, as migas is one of the most favorite dishes of the Spaniards.